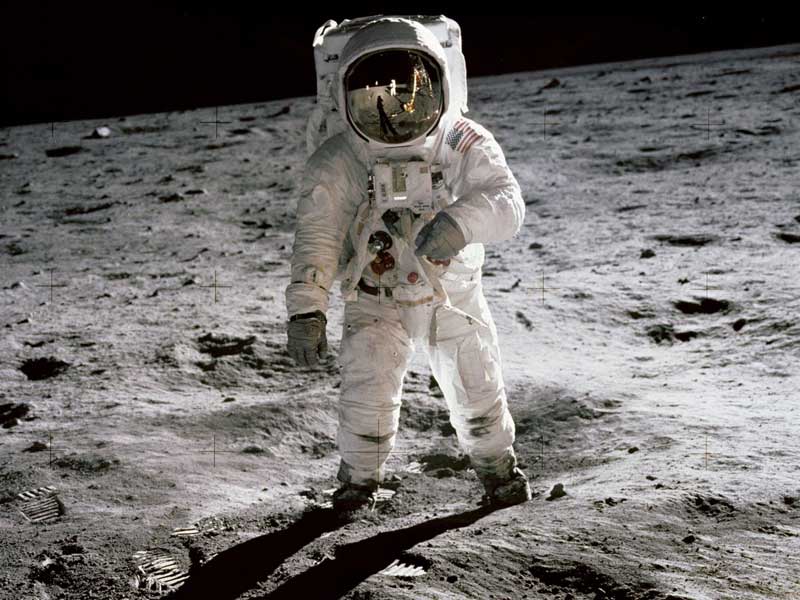 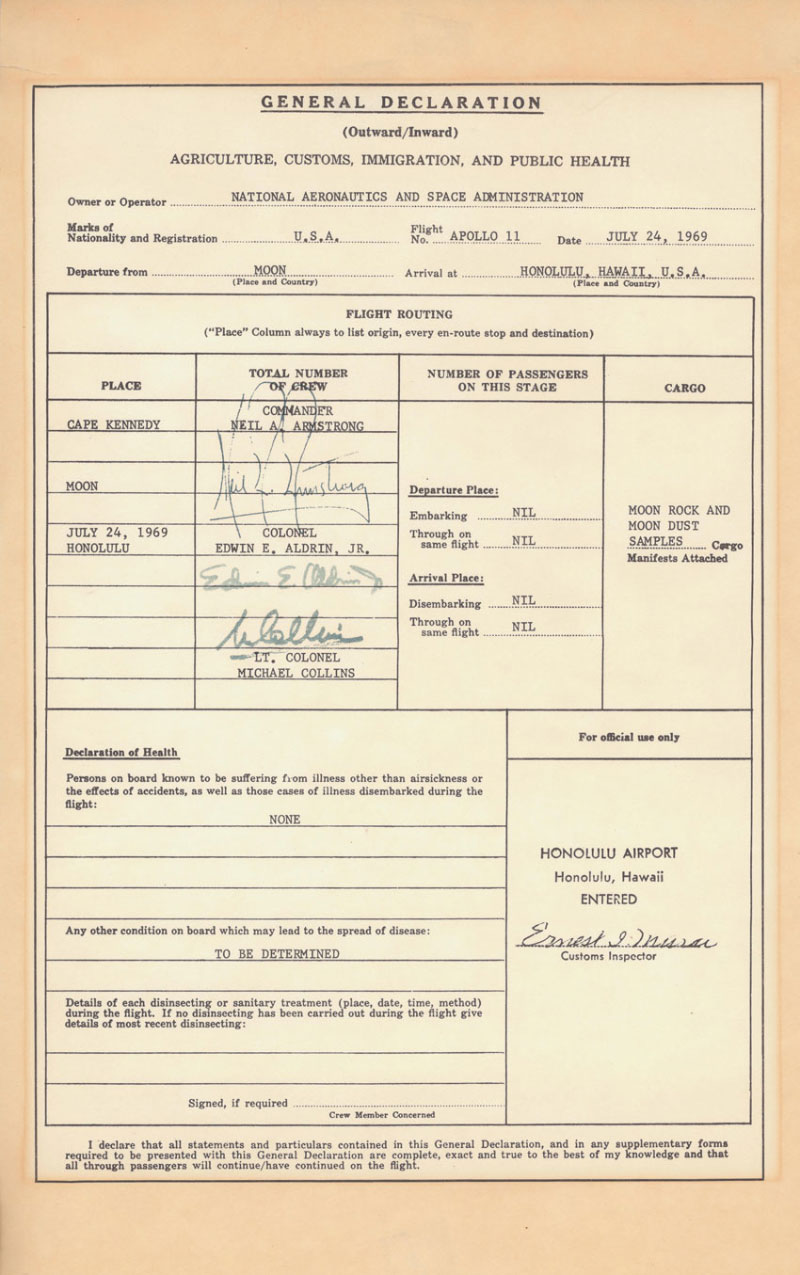 When the crew arrived back on the Earth from the Moon, people from US Customs have reached to them. They asked the crew to fill the US Customs form due to the import of moon dust and rocks. The Crew also enlisted their complete flight route on the form; departure from Cape Kennedy, Florida, towards the Moon, and arrival from the Moon to Honolulu, Hawaii on Earth.

The US Customs department had to verify, whether or not, the astronauts had got any disease or not. But they couldn’t discover it, so they simply wrote “to be determined” for a later check-up. On the cargo section of the form, the crew declared the samples from the moon as “Moon rocks and Moon dust”. 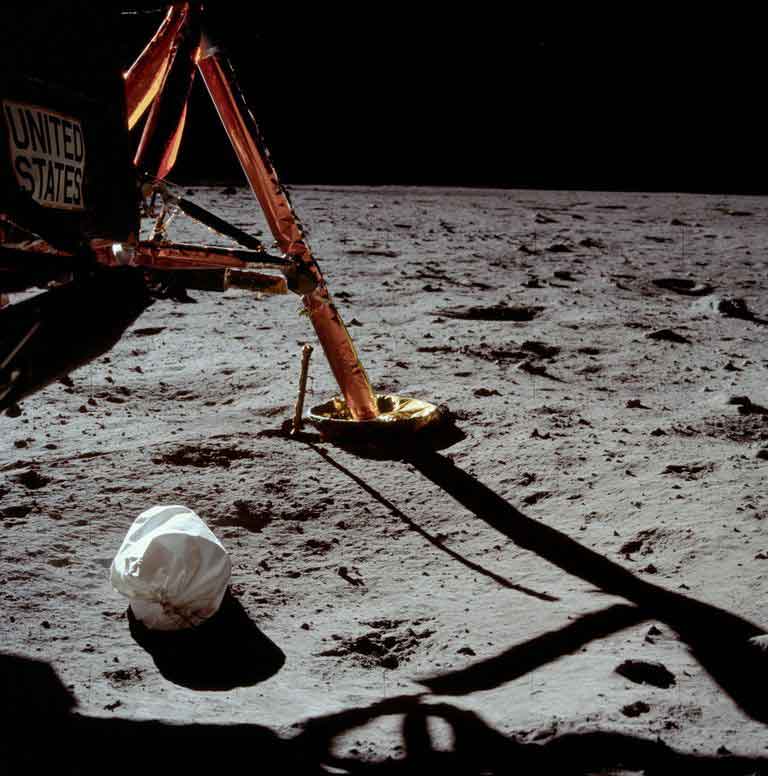 The crew has stored a bunch of food wrappers after eating, and several containers of poop on their travel to the Moon. Upon their arrival on the Moon, Buzz collected all the trash in a bag and handed it over to Neil Armstrong. Armstrong when descended from the lunar module and set foot on the surface of Moon, he threw that trash bag on the surface of Moon.

The crew also dropped a few more trash bags and some tools because they needed more space for taking samples from the Moon. They also threw one of the most important tools – laser reflector – that was used to measure the distance of Moon from the Earth. All the trash that Neil Armstrong threw on the surface of Moon is still present there (Just waiting to be discovered by next-generation!!).

Most of the pictures in which an astronaut is shown on the moon are of Buzz Aldrin, not Neil Armstrong. It is because the main camera for taking photos was operated by Neil Armstrong. He used that camera to shoot Aldrin photos on the Moon.

Buzz Aldrin also had a camera for which he was directed to take certain photos of Moon and its features. The only photo of Armstrong was taken by Aldrin only by chance when Aldrin had to take pictures of the lunar module on which Armstrong was doing something.

Neil Armstrong and Buzz Aldrin were the two astronauts who landed on the surface of Moon on the Lunar Module. However, there was also a third astronaut, Michael Collins, whose job was to stay on the command module and control it while orbiting around the Moon.

Collins was on command module for more than 20 hours alone and was directed to return back to Earth alone if the other two astronauts could not manage to reach the command module. Collins, while orbiting, took photos of the Moon as a whole.

Maker Of US Flag On The Moon Is Still Unclear 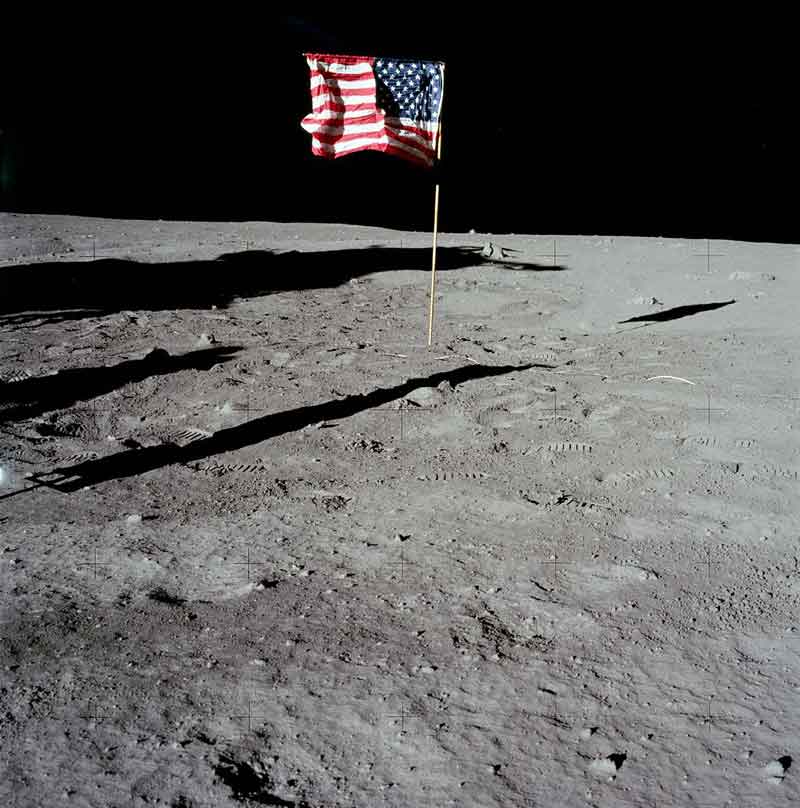 US flag was planted on the Moon by Neil Armstrong and Buzz Aldrin near their lunar module. The actual maker of the flag is still unclear and many companies claim to be the maker of that flag. NASA has not officially announced the maker of the US flag, but they once hinted about the company Sears. When that happened, the company Annin puts its thumb-up and said, I have supplied the Sears with US flags at that time.

The Crew Was Not Able To Get The Life Insurance 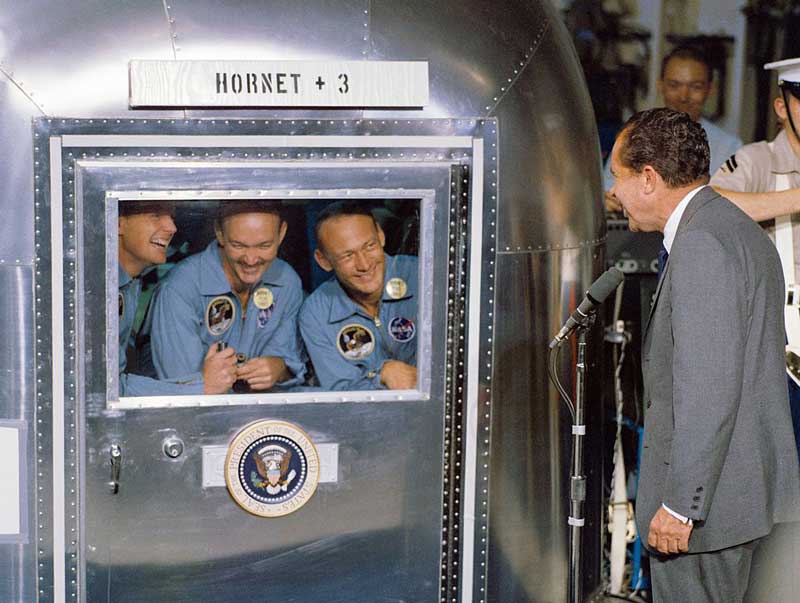 The crew of Apollo 11 were the first humans to interact with the Moon’s surface. Upon their arrival on the Earth, NASA was unsure about their medical condition. So, the crew was quarantined about 3 weeks until their medical examination was done, and it was clear that they got no disease from the Moon.

The samples from the Moon were also isolated and were examined for the presence of microorganisms. But soon scientists found that the Moon was sterile and there was no sign of life. Today, when astronauts return from space, they are allowed to mingle with people because there is no risk of getting an infection from space.

Astronauts Smelled the Moon Dust After Entering In the Lunar Module

After spending time on the Moon, astronauts had to enter the lunar module to prepare for departure from Moon. When astronauts removed their helmets inside the lunar module, they were astonished to smell the Moon dust; it smelled like gun powder. The dust they smelled was trapped in ridges of their spacesuit. One of the crew members also tasted the Moon dust just to be the first person to taste the Moon! 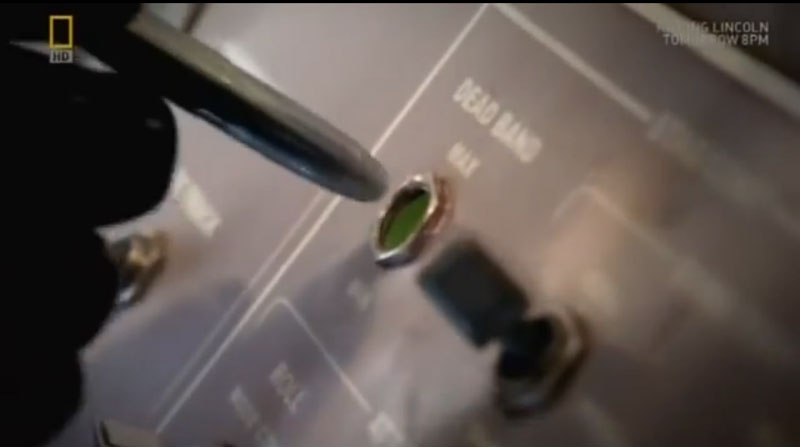 When the crew loaded all the necessary equipment and samples of the Moon, they entered in the lunar module. Upon entering in the lunar module, they found that one of the most important circuit breakers switch was somehow broken. It was not possible to leave the Moon without the working of that circuit breaker. The crew informed the mission control team on the Earth about the scenario and waited for the solution to come. But Buzz Aldrin became impatient and he inserted his pen into circuit breaker switch to turn it ON. The quick fix of Buzz Aldrin worked just right and the crew successfully departed from the Moon.

The US Flag Blasted Away On The Moon